Rift basins are among the most common hydrocarbon and groundwater plays, and thus important to society. Successful exploration and production in rift basins requires a sound understanding of their three-dimensional architecture and their geological evolution through time. 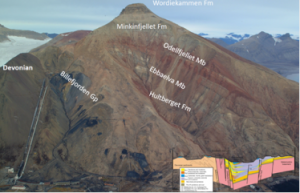 During this Arctic Petroleum Field School held in mid-September 2018 we visited the Billefjorden Trough, an excellently exposed rift basin in Svalbard. This Carboniferous half-graben hosts marginal sandstones as well as basinal carbonates, evaporites and shales. Several types of source-and reservoir rocks were explored, as was the influence of tectonic activity on depositional systems.

The field course was financed by the Petroleum Research School of Norway (NfiP, see www.nfip.no for more information) and was attended by 19 students from around the world. A mix of geologists, geophysicists, petroleum engineers and drilling engineers attended the field school, contributing to stimulating discussions at outcrops. The students formed four groups based on complementary competences, and were tasked to define a potential drill location in the Billefjorden Trough arguing both for the various petroleum system elements but also technical and environmental aspects of drilling in the high Arctic.

In addition to the excursions we acquired and processed photogrammetric data on selected outcrops to generate virtual outcrops. A selection of these virtual outcrop models will be presented by the students on this blog over the coming weeks. Most of the photographs were acquired from the ground, but we also had several drone missions to photograph hard-to-reach locations. Including the summit of the Pyramiden mountain itself!

Most of the course was based in the (almost) abandoned Soviet coal-mining settlement of Pyramiden, allowing easy access to the outcrops as well as safety – polar bears only rarely venture into the Pyramiden hotel. All in all, a very nice week in the field with good weather and a great group! And special thanks to Aleksandra Smyrak-Sikora, Tormod Henningsen and Erik P Johannessen for co-leading the NfiP Arctic Petroleum Field School in 2018, and Julian Janocha and Martijn Rodenburg for keeping us safe out there and flying the drones.